Although I use a digital camera to record what I think of as “notes” in long shots and close ups, I am a mental camera that stores an infinite amount of data. In my university and college lectures, I used to pretend that I was a camera taking stills, by walking around with like a robot, staring in one direction, clicking, and then taking diverse tacks and perspectives. That was to illustrate how kinetic and spontaneous our vision actually reflects what we are thinking. Perception is not mathematically objective, but emotionally subjective.

I used to think of myself as a gardener until recently.  The artist Joan Miró once said, “I work as a gardener.”  And look at his compelling and exciting mature abstract work!  But I enjoyed using a natural palette of stone, shell, flowers, shrubs, trees, and garden ornaments. I rarely painted what I planned and planted, as it was “real,” whereas painting is imaginative in a very different way…much more cerebral too. But photographing the garden was and still is, a real disappointment. Why?  Because we see so selectively, and cinematically move through our world editing constantly. That peppermint lily next to the statue with bromeliad’s…unconsciously we zoom in and focus smoothly, shutting out everything else. But we are, like a Hollywood editor or cinematographer, cutting constantly–using long shots to establish context, and then honing in on detail.

And yet, the most “expressive” aspect of our mental camera work involves memory. For example, the four months in the summer and fall in down east Maine doesn’t disappear when I am in Florida. I have just completed, and am still working on that “memory library” that distills untold hours of hiking, watching, discovering. The catalyst for accessing this “file” is working on wood, which is some kind of “touchstone” in my world of natural materials. The palette knife and a really beat-up fairly large brush, and a tiny round are my tools. The way the paint works with those tools and the uneven wood surface is so harmonious and “easy,” like ice skating or riding a bicycle. With no planning, colors and moods come into being, rocks, pine trees, islands, clouds…. I had to focus on seeing how many I could do before I would run out of ideas or become “bored.” I am not surprised actually to find out that there is no sense of repeating anything after two weeks of working on around 100 images. And what is clicking in is greater visual discovery each day. “Necessity is the mother of invention,” is a quote I use quite often.

When I went to Mullet Key for the first time since I’ve been back from Maine, the water temperature was 80 degrees, so I stayed in the water for two hours. I love the buoyancy of salt water, and the one to two foot baby waves were soothing and delightful. It was a great way to become reacquainted with a major influence on my writing and painting. I saw everything as if I were painting it without brushes. It was like being in a painting, if that is possible. But the real learning curve came out on the long fishing pier near Fort Desoto at sunset. As far as I can figure out, the sunset took about three hours. On the Pacific in southern California, the sun sank in minutes and it was instantly dark.  Even as I drove home at 10 p.m., there was still lingering light. And what delicate nuances of color and contrasts!  It was like a musical symphony that you never want to end…it was all about seeing what was happening in the gentle blue east, above where the crescent moon was, and the red and greens in the west. To the south, an incongruous  huge cruise ship passed, then a picturesque freighter and a small fishing boat. Lights dotted the shore of Anna Marie Island across the pass, and the Egmont Key lighthouse added its rhythm of its revolving light. The pattern of the waves was in intersecting triangle. And as I walked back to land, the waves became somewhat aggressive as they hit the rocks of the breakwater. Add to this all the families fishing, the herons and egrets shadowing the people and their poles, it was total poetry!

I was wondering how this would affect the “Maine memory bank.”  Would it distract or delete?  As it turns out, it added and opened new doors!  I couldn’t believe how the Maine vignettes became more “true,” as if the “sea talk” had revealed new ideas and ways of working. I have to say I am in total awe of the Camera of Mind, and the infinite prisms of praise so beyond words. 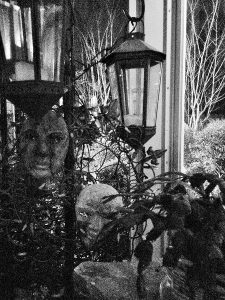